I trust that this site will be a resource for studies that confirm God's reality and the validity of the Bible; and help in explaining some of the gnatty little questions concerning God, the Bible and Christianity. Straight Talk about God is a non-threatening, friendly place to confirm God and build the confidence to act in trust of His word. Straight Talk is not affiliated with any denomination and generally shuns traditional Christian practices and doctrine. Straight Talk is founded on the teachings of Paul, along with those of Dr. Gene Scott. And MUCH independent study. Straight Talk about God is fulfilling Ephesians 4:12, which says that "the work of the ministry" is "the edifying of the body of Christ." In other words, as C S Lewis says, we're supposed to "show off God to each other." That's what this web site aims to do. Jesus told us that no one can come to God unless the Father "draws" him. If you're reading this, then you were "drawn" here and will most likely find the answer to a question that you have about God.

Here's what I believe: Through the evidence of God's hand on the stage of history, His irrefutable creations and His working in my personal life, I gain the strength I need to overcome daily adversity, know His Word is forever settled in heaven, and that He will stand by me.

Be sure to see Fifty Pieces, a book of essays on the practical side of the faith walk.

Listen to Straight Talk about God the first Sunday of every month from 9:30-10:30 a.m., Pacific (California, USA)Time. Jack deals with all the subjects on this web site plus topical issues confronting us such as the United Nations move toward One World Government, the coming Cashless Society, and more.

If you learn something here and feel like helping me reach others, there's a donate button at the bottom of the page.

TOPICS OF STUDY INCLUDE:

The Resurrection: Evidence
Communion: Origin, history, functions
Faithing: Faith is an action
The Anatomy Of A Faith Act: Faith at the Speed Of Thought!
Don't Initiate, Only Wait: Things That Fall Out Of The Sky.
The Key to Life with God: DWIFOY and FOOTS.
The Bottom Line Of Christianity Giving.
Scriptural Evidence for Giving
Three Principles of the Believer's Walk

Gematria-God in Numbers
Gematria-How It Works
Equidistant Letter Sequence plus Gematria Equals God
God Counts-Genesis One and a Number Table
Bible Numerics-Numerical Design of the Bible
The Arithmetic of God -More Numbers and Symbols
English Gematria - It's Real!!
God's Name is the Gospel

GOT A PERSONAL NUMBER?

God's Got My Number
A Long Shot 17
Jack Edward and the Night Visitor
A Jesus Christ New Years Eve.
I Can COUNT On God
Straight Talk about God
The God Steak: A Tale of Seventeen

THE BACKWOODS PHILOSOPHER Essays on Living

HEROES OF FAITHing Bible stories for adults, written so young people can understand.

UNDERSTANDING FAITH AND THE BIBLE


Fifty Pieces A book of essays dealing with eight diverse Christian topics, five of which are represented on the Fifty Pieces page. One or two pieces are offered in each category, plus an Appendix which contains a synopsis for each piece in the book. Fifty Pieces answers often asked questions about God, the Bible and Christianity. Fifty Pieces also contains study helps for understanding the Bible and outline notes for discussion topics. 400 pages.

It was the information on the Lost Tribes that brought me back to God. I grew up in the Baptist church, but left as soon as I was big enough. I BELIEVED them when they said that Catholics weren't Christians!! It was, and is, a good place to be from. I was going my own way up here in Pot country (northern CA); The Emerald Triangle, so called. Doing very nicely, too! Then I bought a satellite dish to counter the bad reception of our two very commercial TV stations. Only had the dish a couple weeks when I ran into Dr. Gene Scott. Shortly thereafter he began teaching on the Lost Tribes. It was the first SOLID thing I'd heard about God in 45 years. I've studied, taught, written a book and done radio broadcasts on the subject over the last 24 years and I still get turned on by the whole thing.

I know that acting in faith, faithing, is not only the single thing, we Christians must be about, but I also know that faithing is the most difficult thing we can do. It takes great amounts of courage to step out toward the unknown. That kind of courage, which can only come through a psychological certainty of God's reality, is what we need when facing doubt and adversity. No psychological certainty comes without looking at the evidence. Hard historical, archeological evidence, plus a simple understanding of human nature can supply such a psychological certainty. A short synopsis of each piece is contained in the Appendix on the Fifty Pieces Introduction Page.

Return to Subjects of Study at the top.

Remember to tune in to Straight Talk about God every first Sunday of the month from 9:30-10:30 a.m., Pacific Time.

Straight Talk is now hooked up to PayPal for your convenience. Thanks for your support.

Thank you so much for your interest. Let's get together again. 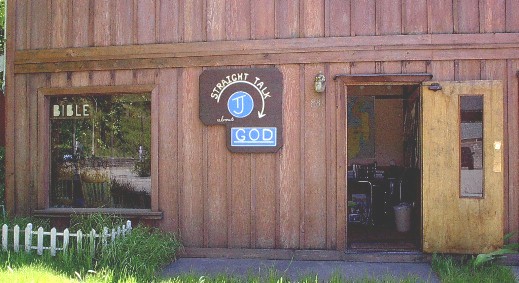 And now off RealPlayer, you can see and hear